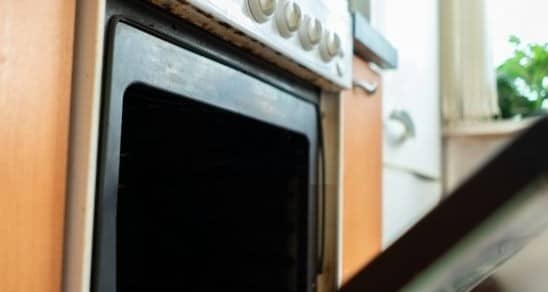 Gas fueled burners are high in demand since the oven has made cooking and heating food more accessible and easy. With all the quick application – it might face some faults in working and hence producing concerning sounds like high pitched noises, puffing, whooshing, boom noise, or your gas oven can sound like a blowtorch. Generally, all appliances make noise even when the oven is heating up as a sign of it working. However the unusual noise when an oven is off or heating is probably a sign to address an underlying issue.

In most cases, these high pitched and concerning noises are caused by some loose parts, warped fan blades, or because the bearing in the fans is wearing out. It can also be the igniter and can be another underlying issue that needs to see a technician or some repair.

You may also like: Best Quiet Wall Oven, Most Quiet Food Dehydrator and Quietest Microwave in [year]

If your gas oven is making noises like a blowtorch, you should not overlook the sound because it definitely needs some fixing. Possible causes for such noise by the oven can be:

3.  Reprove In The Regulator Valve

The gas oven when on or during heating can make such a sound because of the mentioned reasons.

Firstly the igniter with its connection to the valve is used to ignite the gas.

So if the igniter in the oven is dirty or has exceeded its usage limit i.e. gone bad or is faulty, it is one of the reasons why your oven is making boom noises.

One and the only way to fix it to either replace it with a new one or get help from a skilled technician.

If the FS device is malfunctioning it will cause the oven to sound like a blowtorch. By sensing the extinguishment of the flame it disconnects the gas flow from the burner. So by replacing it with a new or proper device you may get rid of the unwanted noise.

The regulator in the oven dictates the quantity of gas flowing to the burner, if the oven is using a high amount of gas flowing during heating then this is most likely to be the case for the blowtorch sound. Adjusting the regulator valve will help solve the problem.

Check Out The Top Rated Gas Valve on Amazon in [year]

Before ignition, if the burner receives more than the required gas, it may cause a defect in the regulator valves and cause the puffing sound in the oven.

The gas valve gives out an appropriate amount of gas to the oven for proper functioning: in case it is at fault it will create a puffing sound.

If you have left your air shutter unadjusted, where the relevant amount of oxygen is not provided to the gas oven, it will cause incomplete combustion linking to the puffing sounds in the oven.

To get rid of the annoying puffing sound made by the gas oven adjust the air shutter and repair the faulty gas valves.

Ovens may help us cook food better and quicker but there can be some technical issues and sounds that need to be addressed especially if it’s a whooshing sound: immediate measures should be taken as the situation can be alarming.

To fix the noise, the glow bar will need to get repaired. You can do it yourself while following safety precautions or ask for a repairman.

A boom noise can also be heard from the gas oven when it is heating when ignition to the oven is delayed. Usually, this is caused by dirt accumulated around the igniter and other areas in the oven with grease around the areas.

Cleaning the igniter and the places will fix the boom noise the gas oven is making.

One of the most common noises a gas oven makes is the clicking and popping noise, especially when the gas oven is turned off.

Many aspects lead to such noises of a gas oven. Remains of the food debris near the ignitor are one probable reason why such sound is made.

If there is moisture around the igniter or the burner caps are aligned in the wrong manner then the oven is more likely to make popping or clicking sounds.

To resolve the issue proper cleaning is advised and the burner caps should be aligned. 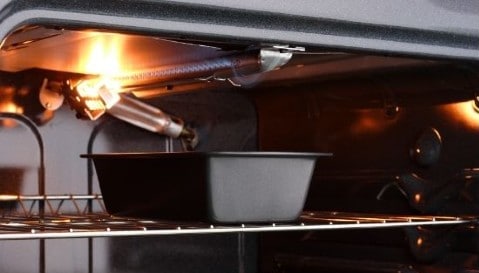 Final Words About Gas Oven Sounds Like A Blowtorch

The above mentioned reasons and problems with certain parts of the gas oven causes blowtorch and high pitched noises.

In most cases, the sounds are not alarming and can be fixed by taking appropriate measures. Make sure to give the valves and igniter a complete check or replacement so no blowtorch sound comes out of the gas oven and it can start functioning properly.

Make sure to get your igniter or the valves a good check and repair or replace them if needed. If the sounds don’t go away, seeking professional help is the way to go!

Like any other machinery, gas ovens get worn out too with work, so such noises are an indication to get any underlying issues fixed in time.

In many cases, the oven needs repairing and cleaning which under instructions can be done on your own with handle and care.

Concluding On The Noises Made By Gas Ovens

Noises such as blowtorch, whooshing, popping, clicking and boom are an indication that the gas oven needs fixation.

We do not advise you to ignore them as they may turn into alarming situations if left untreated. Try locating the issue with the aid of mentioned reasons and solutions to get rid of noises your gas oven is making.

Dave Pearson is a Canadian musician, sound editor, and audiophile. He is also the founder and owner of the website SoundProofGeek. On SoundProofGeek, Pearson offers advice and resources on audio equipment, including how to assess and improve audio quality, how to troubleshoot and repair audio equipment, and how to improve the music listening experience.