Cheapest Way to Soundproof a Basement Ceiling 2022 (Without Drywall) 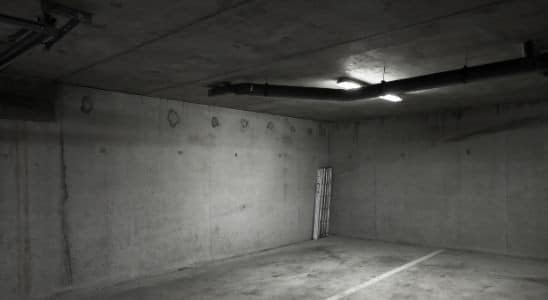 Some basements are the noisiest in the house. In this article, we’re going to teach the cheapest way to soundproof a ceiling without having to install acoustic drywall, or more simply, without tearing your basement walls and ceiling apart.  So what’s the cheapest way to do it? Keep reading to find out!

In a hurry? Long story short – Mass Loaded Vinyl and Soundproofing Insulation Panel Tiles are the cheapest materials that you can use to soundproof your basement ceiling without using drywall. Use acoustic caulk to seal any leaks you can find.

How to Cheaply Soundproof a Basement Ceiling

An extremely effective and affordable option when considering materials for your DIY soundproof basement ceiling project is a material called mass loaded vinyl.

Mass loaded vinyl is a cheap way to soundproof a basement ceiling. We recommend the highly rated Noise Grabber MLV to get the job done.

Another cheap way to soundproof your basement ceiling without drywall is padding the ceiling with these affordable acoustic panels.

It’s a budget friendly way of reducing loud noise coming from your basement – whether it’s a noisy tenant, your child’s band practicing or insulating the sound of the newly-built entertainment room.

Remember that there are multiple ways to soundproof the ceiling in your basement, and many times it will take several different methods to get the results desired.

Planning and foresight will go a long way in soundproofing your basement.

The ability of a material to block sound is measured by an Sound Transmission Class (STC) rating, whereas sound absorption is measured by a Noise Reduction Coefficient (NRC) rating or a Sound Absorption Average (SAA).

The higher the rating the more absorptive the material.

There are many different types of panels that range from expensive to affordable, depending on your budget. We recommend the high-quality acoustic panels by Fstop Labs.

3. Finding The Leaks And Sealing Them With Acoustic Caulk

Acoustical caulk is specially designed for reducing the ability of sound to travel in and out of the basement through air holes that are often unnoticed.

Find all the leaks and use acoustic caulk to seal them.

Acoustic caulk is one of the cheapest ways to soundproof your basement ceiling in tight budget constraints.

We will cover acoustic caulk more in detail later on in the article. However, this is the most affordable and basic way of soundproofing the ceiling of your basement.

How to Affordably Soundproof a Basement Ceiling

Most of the time, basements wind up housing our loudest appliances such as washers, dryers, furnaces, power tools, and numerous other loud appliances.

Methods such as securing the machines to the ground or anti-vibration pads are excellent for reducing noisy appliances.

Basements are also great spaces to set up a home office, a play area for the kids, and even a library. It all depends on your tastes as well as your family’s needs. In that case, even moving furniture around is a cheap way to reduce noise in the house.

Soundproofing a basement and transforming it into your ideal space can be affordable on a range of budgets. It is one of those DIY projects you can knock off your list of things to do on a weekend and be quite easy.

There are two types of ways of soundproofing your basement ceiling. Both of these involve examining the joist cavities.

Since we soundproofing the basement ceiling without drywall, we are going to use other soundproofing materials that are easily available and affordable.

These are perfect for acoustic insulation such as insulation products such as this mineral wool insulation sold by Rockwood.

After using acoustic sealant around the room, we’ll next move to insulating and covering the joist cavities to make sure you have an effective, affordable, and acoustically insulated basement ceiling for this 2022.

If you have the time, this is a perfect DIY project.

Some Materials to get us Started on our Soundproofing Project

Just reducing the noise in your basement through caulking is not enough. Depending on the reason for your project, you’ll need different types of materials, which I’ll cover below.

As I have mentioned above, there are many reasons why someone might want to have their basement soundproofed. For example, converting an unused basement is becoming a great way to make additional money.

Acoustic caulking is a cheap step we’ll take when beginning our 2022 DIY basement insulation ceiling project. This is an affordable way to ensure that each of the other steps are effective by sealing all doors, windows, cracks, gaps, holes, and joist cavities, which are the spaces between the joints of the floor on the basement ceiling.

Once we’ve covered all the cracks, it is time to choose the sealant that you prefer to use. Each of the following products below has been rated four stars and above on Amazon.

Why don’t we just use regular caulk?

The answer to that question is that sounds vibrate in waves that vibrate objects, including caulk. Acoustic caulk contains properties that make it resistant to the vibration of sound waves.

Most acoustic sealants are in tubes that take up to 48-hours to dry. A quick look at Amazon’s top sellers in 2022 include:

Green glue is a great choice when considering acoustic sealants as it disperses the soundwaves into heat across the ceiling.

Once you have sealed off every nook and cranny in your basement, it is time to consider insulating the walls and ceilings.

We will be focusing on ceilings and will not be using any drywall.

The list below has the cheapest soundproofing products available on the market in 2022 for your DIY soundproofing basement ceiling project.

First on our list is the mass loaded vinyl. It’s quite easy to install and very effective. We recommend the high quality Noise Grabber MLV for the best result.

The following products are acoustic panels that fit budgets both big and small. The most expensive on the list is the Rhino brand of acoustic tiles, which are much more expensive than the other acoustic absorption panels on the list.

For those looking for more affordable options, the 12-set acoustic absorption panel will do the trick.

When considering what type of acoustic tiles we would like to use in our project, we want to consider what type of tile we should purchase.

Our list above provides some products that you might want to use in your DIY soundproofing project.

Two other items that we will definitely consider in our soundproofing project are acoustic tiles, acoustic mats, and numerous other items.

One of the most pleasing aspects of a DIY basement project are all of the options that are available for every budget.

Even the most basic acoustic paneling can reduce unwanted noise coming from the basement or from upstairs. Though we’ve provided a small sample of products available

If we’re designing a home music studio or building a space in which acoustics are important, we will need to use acoustic foam.

Acoustic foam absorbs sounds yet releases them back into the room to control, increase, and optimize the sounds in a space. We recommend these high quality Acoustic Foam Panels.

Aside from caulking the room, blankets are an affordable choice to eliminate unwanted sounds.

Soundproof blankets are a cheap way to make a room soundproof.

Blankets work by either absorbing the sound using fiberglass.

Soundproofing on the Cheap

These different methods can be mixed and matched, so that you are able to stay within range of your DIY project budget and get the best soundproofing on the cheap.

We’ll walk you through a case study with a moderate budget that has the best materials for the most affordable price.

First of all, we need to do a thorough inspection of the basement, assuming that there are no structural integrity issues, we would purchase acoustic caulk.

We provided links to products that are both affordable and scalable depending on your budget and how cheap you want to go.

In this case study of an affordable DIY basement ceiling project, the landlord would like to earn some extra income by converting the basement into a bedroom for rent.

However, to do this, the landlord is afraid that he’ll have to spend a fortune tearing down walls and rebuilding floors. Luckily, he came across this article.

As we’ve emphasized, beginning by utilizing acoustic caulking on all openings as well as where the basement ceiling meets the floor is the absolute first thing on any DIY soundproof insulation list.

Once that has been completed, now would be a good time to place sound absorption panels into the top of the basement ceiling.

This will ensure that noises are absorbed in the basement ceiling rather than dispersed through the basement, and eventually into the living space above.

Finally, after completing the two most important tasks, our landlord added a couple of stylish rugs on the upper floors, added bookshelves, and improved the living space by adding a TV and surround sound system for his tenants.

DIY project two is an almost too typical scenario. One of the kids acquires a guitar, drums, or another musical instrument, then suddenly it’s jam night in the basement every night.

So, to preserve their sanity, yet still encourage their children’s musical pursuits, a cheap DIY basement insulation project was decided on.

Of course, acoustic caulking was done first followed by using acoustic wool and foam. Acoustic pads were utilized but they were strategic and didn’t cover the majority of the ceiling as they did in the other project.

Instead, the acoustic foam was used to improve and control the sound in the basement so that it wasn’t causing such a ruckus upstairs.

Now that we’ve completed our DIY basement ceiling project, even without having to rip out or add any drywall, we want to make sure that we keep those loud noises out by maintaining our improvements.

Basements usually have a lot of humidity problems, mold issues, and flooding issues among the many problems we’ll encounter in the maintenance of our newly-soundproof basement.

This article has described how to soundproof your basement ceiling. It has provided numerous links and information to get you started.

The cheapest ways to soundproof a basement ceiling are to use mass loaded vinyl or acoustic tiles.

When we have a much larger budget, we can use even more materials to improve the sound insulation of your basement ceiling.

Sound blankets are also a very cheap way to soundproof your basement ceiling.

Paneling, which is extremely important, when trying to soundproof a basement can be quite expensive. However, we’ve provided a list of affordable options when it comes to acoustic paneling.

Acoustic foam is meant for home studios to spread and control sound, while acoustic tiles are meant to reduce the overall sound escaping the room. 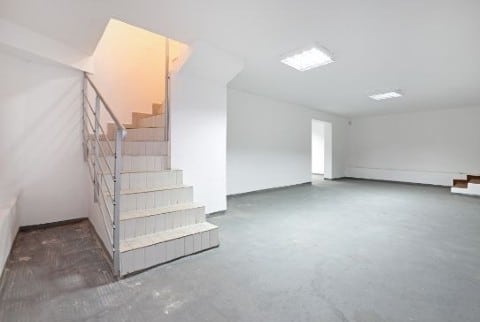 The cheapest way to soundproof a basement ceiling is dependent on your budget as well as your needs. And there are ways for you to remain within that budget due to the availability of affordable options in 2022.

As technology progresses, it is likely that there will be even cheaper options available to DIYers. But, for now, we’ve provided a comprehensive list to get you going on your budget project.

Two of the most basic products that help you to soundproof your basement ceiling for cheap are the MLV and acoustic tiles.

Find all the leaks and use acoustic caulk to seal them.