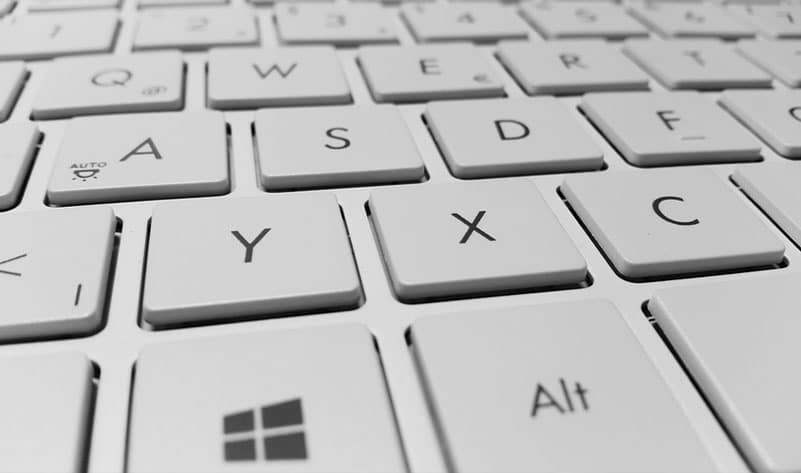 Do you already have a silent computer mouse? If not, you’ll want o to check out my awesome article about best silent mice in 2020. You’re welcome! Okay, enough mouse-talk now, let me show you now the quietest keyboards of this year.

Let’s have a look at the top three quiet keyboards that offer great value for the money.

Top on the list of best quiet and silent keyboards is the Razer Blackwidow.

This keyboard has completely revolutionized the gaming experience with all its mouthwatering specs and features.

You get unmatched speed and accuracy due to its zero compromise mechanical switch. The tactile feedback you get is with a quitter click, so you do not have to make so much noise while gaming and typing.

It only requires 45 g actuation force, and this is ideal for all actions that you will need to carry out using this keyboard; be it gaming or typing.

This keyboard comes to you in a tournament-ready design. You have a keyless design with a removable USB cable that provides portability for gamers who love to play on the go. No inconveniences or time wastage is tolerated.

A special favorite of ours is the lighting. It is immersive and can be customized to enhance your gaming experience in a way that is unique to just you.

The backlit keys are of Chroma RGB lighting and include 16.8 million colors. They sync with the gameplay and other Chroma enabled peripherals, and Philips HUE products.

Now you can have all your keypress combinations remapped to carry out those complex tasks with the fully programmable macro support.

Apart from the fact that it is made to cater to your gaming and typing needs with a top of the art software programming, its ergonomics are such that you get unequaled comfort as you make use of it. The magnetic wrist rest made of leatherette gives you comfort as you use this keyboard over extended gaming sessions.

Click away without fear, because this durable design supports up to 80 million clicks so that you can game all day without fear of having to replace your keyboard soon.

Take your typing and gaming to the next level with this awesomely built keyboard for you.

Its three-zone backlighting and 10+ vivid RGB lighting allow you a number of choices between lighting effects for you, all to provide you with the best keyboard experience.

They are 6 programmable macro keys with adjustable height that enable you to carry out powerful actions and combos, providing you with endless possibilities and giving you so much more ease of control.

You can also easily control the volume with the dedicated multimedia keys, without having to interrupt the game.

The keys you have here are quiet, but very responsive and give you satisfaction with every keystroke.

Compatible with a lot of operating systems and USB ports ranging from windows 10, windows 8, and Windows 7 and also windows vista. USB types are USB 2.0 ports.

You do not have to worry about lost commands as the multi-key anti-ghosting feature ensures that all your entries are registered and executed accordingly.

Play all you want and for as long as you wish without fatigue or pain in the wrist because the design of this keyboard is to ensure you have comfort.

Next on our list of best quiet and silent keyboards is the HyperX Alloy Core RGB Keyboard.

It comes with lighting effects that are customizable and bring your keyboard to life.

You have 6 lighting effects to choose from, and they all give your keyboard a  classy look.

With the HyperX, you do not have to pay for every little mistake of spilling water on your keyboard.

This is because unlike most keyboards which become defective once liquid cokes in contact with them, the HyperX can resist up to 120 ml of liquid, so all those little mistakes do not cost you your game or keyboard.

The keys are quiet but very responsive, so you can type and game on it without having to make a whole lot of noise with each keystroke. You can take this keyboard with you as you go out because it is very light and durable.

Operating systems that can run perfectly with this are windows 10, 8.1, 8 and 7. This is pretty much all that is in use today so you have no limitations here.

Logitech K800 also happens to be the keyboard I have been using since quite some time.

It’s one of the most affordable, yet feature-packed wireless keyboards.

Although it is not ‘labeled’ as a silent keyboard, it’s quieter than most keyboards out there.

Plus you also get features like hand proximity detection (backlight turns on automatically when your fingers are near the keyboard), thin profile, laser-etched backlit keys and a comfortable typing experience (thanks to the PerfectStroke key system).

It uses a Logitech Unifying receiver, which allows you to connect other Logitech devices (up to 6) using a single USB port.

Add a Silent Plus mouse to the equation and you get a quieter and more comfortable typing and clicking experience.

However, these wireless devices are targeted at general consumers and not meant for gaming purposes or stuff that requires precision and low latency.

PS: The keys are perfectly visible even when the backlit illumination level is set to minimum. Setting illumination to higher levels wastes a lot of battery juice and is not recommended unless you absolutely need to do so.

The K740 wired keyboard has a lot in common with K800, including a similar typing experience, thin profile, laser-etched keys and backlit illumination.

The palm-rest is coated with rubber, which means better grip and a soft-to-touch surface.

Before buying the K800 wireless keyboard, I used K740 as my primary input device (it became unusable after kids pulled off some of its keys).

K740 offers a similar typing experience as K800 and the main difference between them is wireless connectivity and hand-proximity detection.

If you are not specifically looking for a wireless keyboard, K740 makes more sense as it’s more affordable, slimmer and offers better response time (it’s a wired keyboard so obviously the latency is low).

For a great keyboard that types quietly and provides you with great user experience on a budget, the best choice for you is the Redragon K5002 RGB Gaming Keyboard.

It comes with Chiclet keys that are meant to last long and be responsive.

You type with less resistance from the keys, letting you do more with less stress and still receive the tactile feedback each time.

You have 6 lighting modes to choose from according to your predilection. They are 4 backlight levels, and you can turn off the illumination if you so, please.

The keycaps are laser engraved so that you will get clear and uniform backlighting, all to ensure that you get the very best out of your keyboard.

The feel of the keys and keystroke accuracy ensures that you can type with few chances of making errors. It is an absolute office tool that makes work easier.

You do not have to lose your keyboard anymore because of little splashes of liquid as the Redragon can withstand average liquid spills.

The wrist rest allows you to type and game for hours without feeling discomfort or fatigue.

Who Needs a Silent Keyboard?

Loud keystrokes and clicks can be irritating and disturb people around you, especially in quiet environments such as libraries.

Although our own minds eventually get used to such sounds while we click and type, it bothers others when they are trying to focus on something.

A silent keyboard not only saves people around you from loud and annoying noises but also helps you concentrate and focus.

Quiet(er) keyboards are particularly useful in office environments, university dorms, libraries and of course the bedroom.

When I first started using a quieter keyboard, I wondered why I never thought of it before.

I had to compromise on some advanced features after switching from a regular keyboard to a quieter one, for me the pros easily outweighed the cons.

Silent keyboards make a lot of sense for frequent typists and people who spend most part of their days (or nights) working (or gaming) on a computer.

You definitely don’t want to disturb and irritate others around you, especially in situations like when someone is trying to sleep or read.

What Differentiates a Silent Keyboard from a Regular Keyboard?

It’s hard to point out keyboards specifically labeled as silent, which makes it difficult to find a quieter one.

However, there are a few things that help filter out such keyboards. Most manufacturers mention the key-types such as Logitech that offers many keyboards with PerfectKeystroke system.

You might also come across some DIY solutions that claim to make a keyboard quieter such as dampening rings, but those solutions don’t work for everyone.

In addition to the noise produced by your fingers slamming the keys, keycaps hitting the keyboard base also contribute to the overall loudness.

Wired vs. Wireless Keyboard – Which is Better?

If gaming or other high-precision stuff is your thing, wired keyboards are a better solution as wireless keyboards are more suitable for general home users.

How Quiet Silent Keyboards Really Are?

No keyboard can be totally silent as there must be some sound produced by your fingers slamming the keys.

However, quieter keyboards minimize the noise by providing a cushion between the keys and keyboard base and evenly distributing the force across key surfaces. Although silent keyboards help eliminate most of the noise, none of them is totally silent in a literal sense.

The good news is that quiet keyboards are far less irritating as regular ones and are good enough for most situations when you don’t want to disturb people around you.

Since it’s hard to find scientific studies that help determine quietness of keyboards, we can only count on details provided by manufacturers and our own ears to ‘hear’ the difference.

Razer BlackWidow is the best choice for gamers. Being a wired gaming keyboard, BlackWidow offers better response time and other fancy features primarily intended for gamers.

Corsair K55 and HyperX Alloy Core RGB are also great silent keyboard options for gamers and more suitable for the ones who are on a budget.

The K800 Wireless Keyboard offers almost everything we have come to expect from a well-known brand (at an affordable price), including quieter and comfortable keystrokes, laser-etched backlit keys and hand-proximity detection.

K800 also helps you get rid of tangled wires and offers a decent battery life (if you leave the hand proximity feature on) and is suitable for a casual gamer. If you prefer a wired silent keyboard instead of wireless, go for Logitech K740.